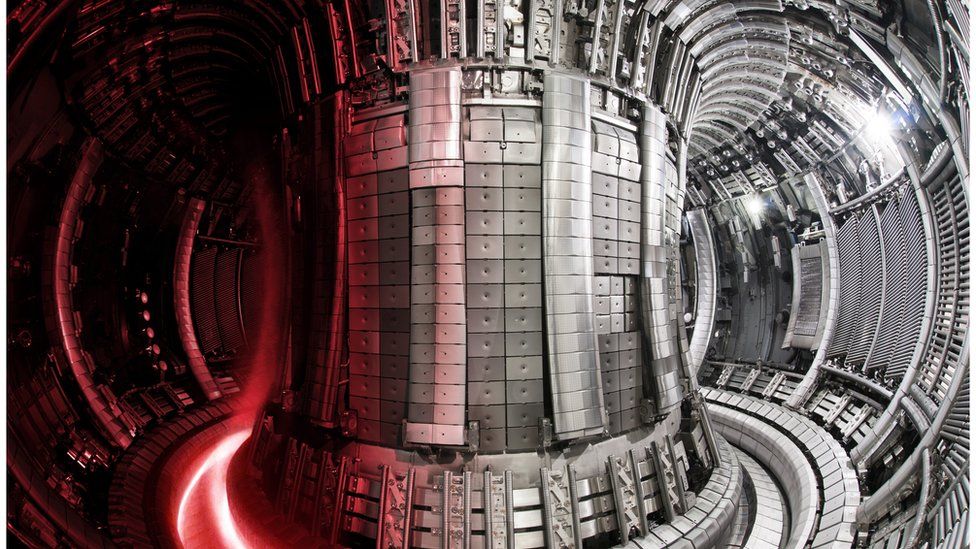 It’s just media hype, BBC style. Europe’s ITER has collected Euro 65b of public money on the fusion lie. Well not a lie, but misinformation. To maintain funding. If politicians – and the handful of duped investors – really new the science it would be given a few million, but that’s a digression…

From the data in the BBC/Oxford/JET article the ratio of energy out to energy in is only 1.1%, and only for 11 seconds…

One suspects BBC/Oxford trying something similar to collect some of the billions going into UK fission projects for the JET project. There’s 300 scientists working on JET after all.

The downside of hyping such projects is it delays public acceptance of fission (the same way the fossil fuel industry plays the green renewable card to the public).

Most investors are more savvy – it’s their purpose to be savvy. Eg, now Bill Gates, and of course the Turkish, Chinese, Russians and French.

Note that ITER is aiming for Q-Plasma parity. Not Q-Total… A small detail even the director of ITER opening ignores, and I am sure an ignorance he promotes. What’s his budget after all? Watch the YouTube in this article:

Whilst it’s not our focus – ours is production of energy using Molten Salt Fission Energy technology and Thorium – we’ve found it appropriate for a couple of focused articles – this one on JET and one on ITER – to highlight the inappropriate gap between the science and the spin.  Both articles are be found here.

This spin on fusion distracts from real progress on carbon free power production for our societies. It diverts attention from real technologies. It confuses the public. It diverts public money – and a few duped private investors – who, given full knowledge, would provide their support to such projects more judiciously.

For more comprehensive study on the inadequacies of fusion for power production we refer you to the work of Steven B. Krivit and this site New Energy Times.

An Anti-Nuclear Advocate Sees the Light, Changes Their Ways, Wants to Help Others Change Also

The Secret to Success in this Sector is to Be Passionate

By Wade Allison, professor of physics at Oxford University. Written 20 September 2022 Though an ideal energy source, nuclear made an unfortunate entry into world affairs. Accompanied by frightening tales of destruction it failed early on to gain the confidence required of a leading contributor to future human prosperity. Is radioactivity and nuclear radiation particularly…

Nuclear is the Only Answer to Our Energy Transition

By Wade Allison, professor of physics at Oxford University. This was first published in the New Statesman special supplement on Energy and Climate Change on 27 May 2022. Reproduced with permission from the author. Finding sufficient energy is essential to all life. Humans have excelled at this, notably when they studied and overcame their innate…